I recently had the opportunity to travel from Portland to Houston. Since I had the time to waste on it, I decided to alter my route to visit the city of Albuquerque. Yes, we all know this to be the city of fame because it’s the only word to feature 3 U’s. That is a pretty impressive achievement, but I’m not going to denigrate that fine city by pointing out its inherent vowel-fouls. I’ll just go with the obvious.

I took these pictures:

Fans of Breaking Bad need no explanation. The first photo is that of the White residence, and the second is that of Saul Goodman’s office locale, sans giant inflatable Statue of Liberty. Incidentally, Saul’s office is located a mere six or eight blocks from the house, which made this detour easily reward-able.

I had help from this site in finding the locations, and there are many more, but I had to get to Houston for my new job pronto, and couldn’t stop for a car wash and some Pollos Hermanos chicken.

Rick Santorum has apparently read the John Carter novels by Edgar Rice Burroughs, and is so enamored of them, he will employ their warlike themes to his defense strategy.  Last night at a stump speech, he referenced the novels as a “place like Earth, but more realistic.” The candidate then went on to describe how he would have designed Tars Tarkas, had he been President, or Art Director.

There’s no reason why Martian warriors can’t have crosses on their necks. That would have been totally cool.

In an exclusive interview with The Litter Box, Mr. Santorum sought to clear things up.

TLB: Thank you for joining us today, Rick.
RS: No problem, Johnny Cat. This is a totally awesome construct you’ve devised.
TLB: (blushes) Yeah, well, anyway… why do you want to wage war against Mars?
RS: Not Martians, per se, Johnny. What I’m proposing, and what a lot of bipartisan support is saying is that, well, we need to secure Mars for America. After all, it was an American who first discovered it. It should be American astronauts that first colonize it, and claim it for America. The American people would agree with me, Johnny.
TLB: You do realize that one of the gods of war was Mars, and that the planet Mars was named many, shall we say, moons before our births upon this planet? What conclusive evidence do you have  that we should go to war with Mars?
RS: I have two words for you: Dejah Thoris.

To be sure, William Shatner was the iconic leading star of “Star Trek” (The Original Series), and his portrayal of Captain Kirk lives on in bold color through various media. Along with his eclectic castmates, including the enigmatic Mr. Spock, played with super subtlety by Leonard Nimoy, audiences were treated to Gene Roddenberry’s optimistic, yet drama-filled vision of our future traveling through space. Well, it seems Shatner’s future with the renewed vision of Star Trek is not without drama itself.

When J.J. Abrams was constructing the 2009 Star Trek movie, The Shat wanted in. Abrams admits he had an idea for him to appear in the film, but apparently Shatner fought for a more significant part. He lost that negotiation with nothing, and now he’s back at the bargaining table for something in the next movie. It’s a sticky wicket, but I’d assume most audiences don’t want him involved, myself included. William Shatner has changed since his role as Kirk in the 1960s; he’s morphed into a joke that he gets, and mirrors back at us for profit. He should not return to the Trek universe… especially after directing the abortion known as Star Trek V.

Nimoy worked in the reboot, because we still know him as that serious, super-smart Vulcan from back in the day. Shatner is just a begging egomaniac, and trying to wedge him in to a new episode would simply ruin any chance of winning back the fans that hated the last movie, as well as disappoint those of us who liked it.

The Guardian of Time was a character in my favorite TV episode of “Star Trek,” and coincidentally, The Guardian has more on this saga of whether or not this man will boldly go on to Star Trek 2 glory, or not.

A Letter to the Editor

I keep hearing people talk about an end to the world in 2012 as if its really going to happen. For those who aren’t brainwashed yet, here’s a great letter from Neil deGrasse Tyson to the NY Times offering some insight to what’s up.

In other shocking Razzie news, my movie wife, Sandra Bullock, vowed in an interview to personally accept the award should she win for Worst Actress (All About Steve). This is especially cool because she’s heavily favored to win BEST Actress tomorrow night, and she indeed won Worst Actress tonight. C’mon, Sandra… fulfill your promise! (Update: She did.)

I just finished my first viewing of 2012, and it wouldn’t have surprised me if it walked away with the screenplay award at least. It was a night of dreams come true, and hearts broken. If you haven’t heard who won Worst Actor, prepare to be smugly satisfied.

Some movies from the past could use an update, a polishing here, a plot kink there.  Some fine tuning would work to improve on them.  This is not the case 99% of the time.  This is because 99% of the movies worth remaking (i.e. getting asses in the seats to see them) were already good movies in the first place, and still succeed in entertaining new audiences on Blu-Ray today.  One title, however, seems to fall in the 1% of necessary re-tooling, and it opens next year. 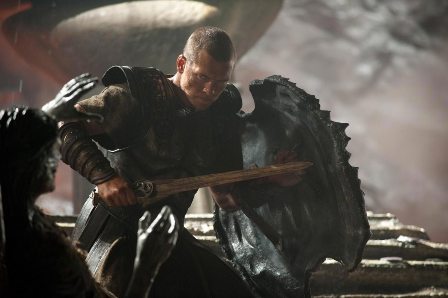 That’s Terminator Salvation‘s Sam Worthington as Perseus in the 2010 remake of Clash of the Titans. And as much as I adored the original for it’s groovy special effects, I could go for a new version, one that’s maybe a little easier to follow, plotwise.  The effects are sure to be excellent, anyway, and lookie here- Liam Neeson plays Zeus, and Ralph Fiennes, Hades.  Winner-potential.

Another project supposedly being hammered out is a live version of Akira, which I think could be fantastic.  And thankfully some remakes I’d heard about are either dead rumors, or failed starts, like The Last Starfighter, The Evil Dead, Conan the Barbarian, and The Breakfast Club.

However, I must frown on the imDb confirmed “in production” crap-fests awaiting us.  In 2010, look out for The Thing (a remake of one of the best remakes in history), & The Birds (No!!).  2011 looms with Escape From New York, and Westworld, while they plan to spit in the face of classic cinema in 2012 with The Dirty Dozen.

It’s really a tired (yet true) idiom of Hollywood running out of ideas faster than the speed of light.  I’m still reeling over the new Nightmare on Elm Street camp.  And I actually wouldn’t mind a remake of some old movies that could use a tune-up.  Farenheit 451 comes to mind, but then again, so does Speed Racer.